Save 15% off new-release and popular tarot and oracle card decks every day!

Please allow 10-14 days for your shipment to arrive. 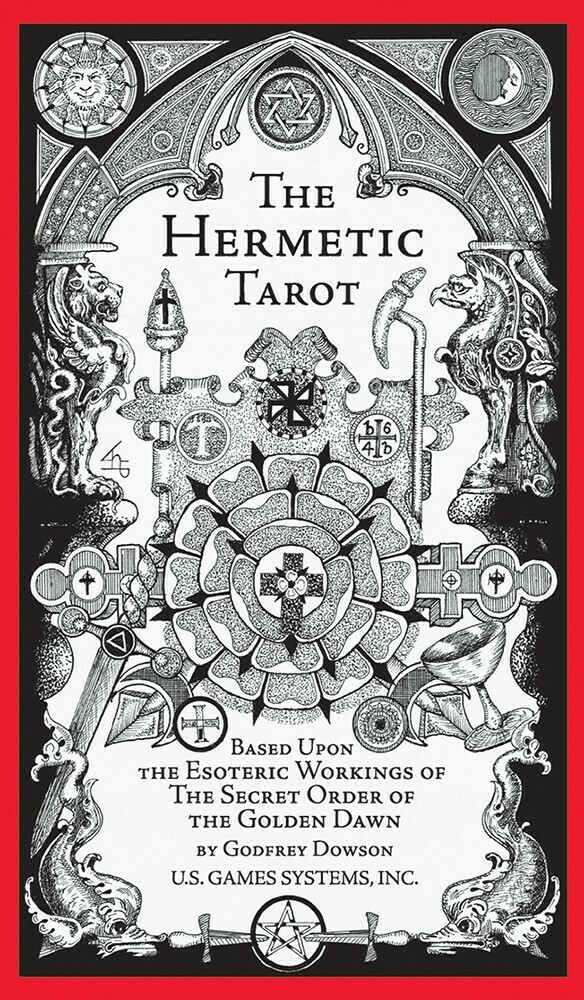 U.S. Games Systems has proudly reissued the Hermetic Tarot deck in recognition of its historical and artistic importance. The details and symbols in each card reveal many of the esoteric workings of the Secret Order of the Golden Dawn, which flourished around the turn of the century.

The 70-page instruction booklet includes an introduction by Stuart R. Kaplan and card meaning written by Godfrey Dowson and Stuart R. Kaplan. The booklet also gives instructions for the classic ten-card Celtic Cross layout and presents a chart of the elemental and astrological symbols, and a diagram of the ten spheres and 22 Hebrew Letters of the of the 22 Paths of the Tree of Life.

This black & white Tarot is unsurpassed as a study deck or teaching deck. It empowers the reader to make full use of all aspects of interpretation at a glance. QUALITIES OF ASTROLOGY This deck is one of the few that easily reveals the planetary influences at work in a matter, or the overall spread and thus lends itself to shades of meaning relevant to the seeker's own elemental nature and birth sign. Each card is visually identified with corresponding planets, aspects, and elements. These qualities alone improve the student's ability to grasp the possibility of deeper levels of understanding in the book of Tarot ... and to expand the readers' scope of divination. QUALITIES OF IMAGERY The symbolism used is powerful and intricate ... a review of any Major Arcana reveals many influences at work. Further, the imagery is intriguing, drawing the eye and the mind into infinite possibility and facilitating psychic placement in the vast expanse of the Astral. The imagery in the Hermetic Tarot facilitates study of the Tree of Life and the Cabalistic perspective. Concepts of Force, Form and Equilibrium are graphically depicted. The Hebrew letter associated with the Major Arcana is clearly visible on each card. The names of the angels of the decans of the heavens by day and by night are included on all the Minor Arcana. Cabalistic and Hermetic symbols that lead one into deeper understanding of the Tree of Life and the Golden Dawn appear on many Tarot. This is one of the few decks that offers two male and two female images in the Court card, in keeping with the balanced view of reality offered by the Tree of Life model. QUALITIES OF INSTRUCTIONAL BOOKLET With constant referrals to SEPHIRAH on the Tree of Life, this booklet makes it clear that the study of Tarot is a deeply spiritual process. Terse, yet thorough, each card is clearly described. Reference to the interpretation of the symbols used is clear. Interpretations of the cards are given as "Dignified" and "Ill-dignified", which in my opinion is far more freeing to the reader than the standard "Reversed" interpretations given by so many decks. Reference is made to the Four Worlds, and the Paths of the Tree of Life in the instructional booklet ... leading the student to a deeper consideration of the expansive nature of accurate interpretation. The cards are printed on sturdy stock, and have born up well after 3 years of regular use. They are of normal size, which make shuffling easy, and it is easy to determine both suit and number of each. I highly recommend this deck to all students of Tarot and use it consistently in all Workshops offered at the Studio.

This is, without question, one of the most beautiful and intricately illustrated decks I've ever encountered. What's more, it is an excellent tool for learning Hermetics and moreover expresses the planetary and zodiacal associations with particular cards and in many cases provides the Hebrew numbers and name translations. The cards reference Kabbalistic elements and in some cases, geomantic patterns. There is a great deal to be gleaned from this deck, as it is not "simplified" and thoroughly challenges the novice to become well versed in Hermetics.

Complex and stark, the black-and-white images are jam-packed with alchemical, astrological and Qabalistic symbols easily recognized by those familiar with those and other esoteric systems. Revealing many of the workings of the Secret Order of the Golden Dawn, this deck draws heavily upon the work of Mathers, Crowley, Case, Levi and others.

The Hermetic Tarot comes with a 70-page LWB, which is thicker than most, which details astrological attributions for the cards and the numerological correlations of the Minor Arcana with the Tree of Life. The LWB also has a handy chart of elemental and astrological glyphs, as well as an illustration of the Tree of Life. However, Hebrew letters rather than actual card names depict the paths on the Tree.

If you're looking to enhance your magical practice or further your knowledge of Golden Dawn esotericism and Qabalistic associations, this would make a fine deck for your studies. The intricacies of the Hermetic Tarot almost serve as a meditative scrying mirror -- and if you enjoy the art of M.C. Escher, you may very well feel an affinity for this deck.

-- Janet Boyer, author of Back in Time Tarot

Though the pictorial symbols on these cards may not be the most colorful, the images hail to ancient Gnosticism and all the mysteries that have tormented the minds of men since the dawn of time. These cards house a myriad of symbolic keys which allows just as many interpretations; lending themselves perfectly to divination, since one truly reads the cards from the soul. These mixed and varied symbols allow the reader to draw inspiration from any number of religious schools of thought, the very fact that attracted me to purchase this deck. I am most highly joyed by the fact that these cards are now in my life.

Save this product for later
Display prices in: USD

Search for your next favorite tarot or oracle deck

As a tarot reader, his/her cosmic mission is to take you to your higher self… to explore your inner-world through the subtle art of tarot!